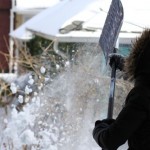 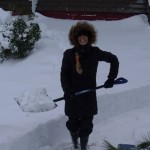 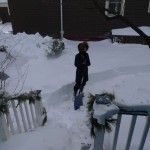 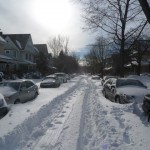 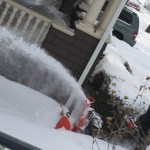 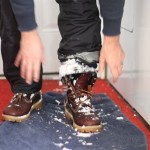 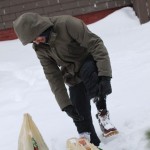 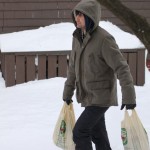 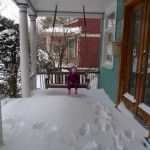 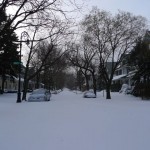 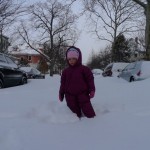 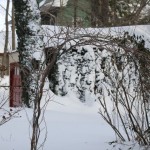 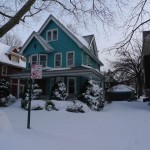 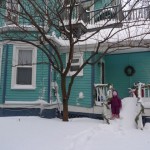 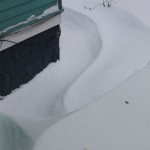 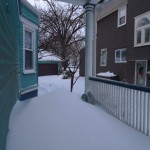 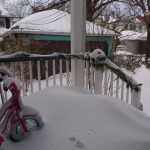 With snow fall records being broken all over the East Coast of America, we were in for a deluge clean up. I was up early opening the blinds to inspect just how much snow we had over night. Elle and I peered sleepily out the window into our yard. It was buried in more than two feet of snow. The chair that I sat in all summer was not visible for the mound of snow covering it. Next we went to the front door and opened it to find the snow all the way to the door jam, inches deep all over the porch. I decided straight away that I wanted to be out in the snow and so while Cam and Maya slept in, Elle and I prepared to brave the cold. I love to be one of the first to walk on new fallen snow. With tentative steps I carried Elle through the knee deep mass. It was so light and powdery and pristine and perfect. I was elated to be exploring the winter wonderland in a rare city silence. With full body steps Elle and I walked towards the road, all the while feeling the resistant of the deep snow. Gradually, making sluggish steps, I plonked Elle down in the the middle of the street. Elle looked up at me with concern “I am on the road” she said knowingly. “Yes I said, the road is covered with snow, and cars can’t drive on it so we can stand in the middle of the road!” Elle was keen to stay outside and each time I asked if she was ready to go inside she shook her head and said “Stay in the snow.” Eventually I insisted we go indoors, my toes were frozen and I needed to thaw out. Back inside Cam and Maya were up and so I sent Cam out for a solo troll to the shops so he could appreciate the the effects of the monstrous blizzard. Once he returned it was time for the clean up to begin. As I enjoy yard work, I grabbed our new shovel and began to dig. It was great fun (and a good work out too!) to be on the street with our neighbors shoveling. All along the block you could see people working together to shift the snow.