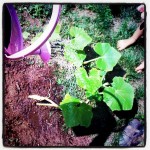 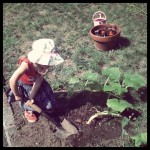 A few months ago Cam became a willing participant in a pumpkin growing competition with some friends from work. For a couple of weeks he had a pumpkin seedling sitting on the window sill at work. He would mention to me now and then that he needed to bring his pumpkin home so I could look after it – he thought this was his best chance at winning the competition! Anyway as it turned out his pumpkin plant became too precious for him to take home on the subway so my first duty was to collect the pumpkin from his office in our car and drive home. Let me add here, that this was my first time driving in Manhattan – yes, to bring the pumpkin plant home! Once home, I re-potted the pumpkin into a large pot. I watered it daily and hoped for the best. About a month ago I started feeling like it was time for the plant to go into the ground. I could not of course plant it in the ground in Brooklyn and so waited patiently until we moved. On our third day hear I borrowed a shovel from Nina, picked the sunniest spot in the yard, dug a hole and planted Cam’s precious pumpkin plant! Nina’s husband Gene explained to us that their zucchini does not grow as the moment it gets flowers the chipmunks eat them – who would have though chipmunks devour zucchini flowers! So fingers crossed we will actually grow any pumkins, let alone a giant one!