Tree wrapping of a different kind….

This Artwork was a Site Specific Collaborative Installation that I directed a few years ago. Artists from the community volunteered to work with students at Shearwater Steiner School in Mullumbimby, Australia. The project guidelines were based on Reconciliation. 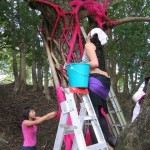 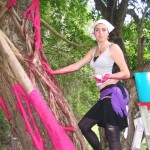 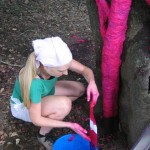 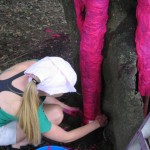 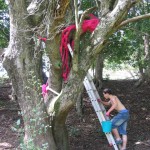 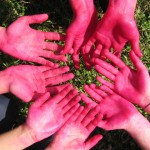 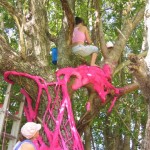 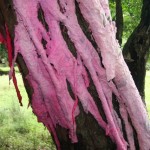 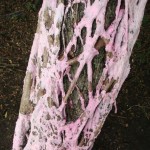 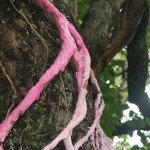 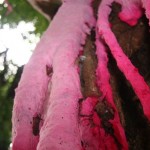 I worked with Grade 8, a small group of students who were very enthusiastic to explore Contemporary Installation. With my higher education history being in Print and Hand Paper Making, the project I set was to wrap or bandage a strangler fig tree that was living upon another tree with paper pulp. This was very symbolic as the strangler fig starts living in the ground next to another tree, and grows up upon the other tree, eventually taking over the tree and sometimes killing it. With the Colonisation of Australia, the Indigenous people were imposed upon, displaced and many were killed. By wrapping the strangler fig it was highlighting the taking over of the other tree and worked well to represent relationships between Indigenous and non-Indigenous thus impact the importance of Reconciliation.

With my direction the students and I created this work from school supplies. I was seven months pregnant with Maya at the time and so had to restrain myself from climbing the ladder to pulp the tree! The students were more than happy to work with my guidance, and instruction on such a vibrant contemporary artwork. The pulp was made from toilet paper which worked very well. Fabric dye was used to achieve the colour. Red was chosen as the effect was powerful contrast against the green paddock the tree stood in. It also made for red stained hands which was a surprisingly ire reminder of the blood shed and lives lost.

As with Ephemeral Artwork it is expected the work will change over time, breaking down and eventually disappearing. What I did not expect was that on the night we completed wrapping the strangler fig that there would be an enormous tropical thunder storm. I lay in bed that night, listening to the rain our roof, wondering what the outcome would be to the paper pulped tree? All that work, to be washed away, and before the public viewing!

The next day, I went straight to the site, and saw something far more beautiful than I expected. A lot of the pulp had remained in tact and still on the tree, but the dye had gradually washed out of it. The pulp had been pounded and so was mottled in places and the colour now ranged from red to almost white. The essence of the materials, the outdoors site, and the ephemeral nature of the work were magnified over night. The significance of this was that the work took on diversity, which also may be seen as symbolic to the theoretical under pinning of the Installation.