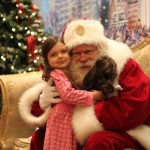 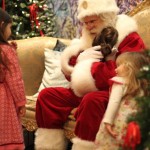 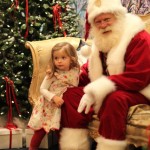 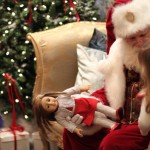 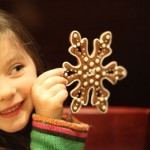 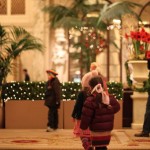 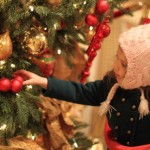 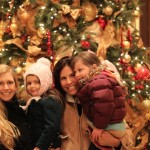 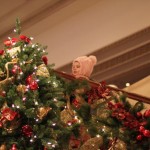 Our next stop was The Plaza, the grand, luxurious hotel that occupies the west side of Grand Army Plaza on Central Park. We wandered around the marvelous foyer, then made our way down to the food court. There we had cookies and hot chocolate. Then to our surprise, while pursuing the boutiques we found Santa! A beautiful, authentic Santa, that could not have been more perfect! Maya and Elle were both very excited to see Santa and instantly warmed to him, telling him eagerly what they hoped for at Christmas. After we left, Maya exuberantly said “Mummy that was a dream come true, seeing Santa!”. So cute! We are so glad to know that Santa stays at The Plaza…we will look for him there again next year!

Long the site for famous performers and guests (besides Santa), The Plaza has also been the site for important political meetings. The nationally known singers Eartha Kit and Peggy Lee played in the Persian Room. The Beatles stayed at the Plaza during their first visit to the United States in February 1964. Today you will find celebrities such as Tom Cruise staying at the Plaza while in New York.

The Plaza Hotel offers its guests and residences many services including a butler on every floor, baby-sitting and concierges, a gymnasium managed by the world renowned trainer Radu, a shopping mall, the Palm Court under the restored stained glass ceiling, the Champagne Bar located in the hotel lobby with views of Grand Army Square, the Edwardian Room, the Terrace Room, the Oak Room Restaurant and Bar, the Rose Club, the Grand Ball Room, as well as meeting rooms and conference rooms.

The Plaza has appeared in many movies and is famous for being the setting of Kay Thompson‘s series of Eloise children’s books published in the 1950s, about a young girl who lived at the hotel…which brings me to the next post…