YAY! Today I finally I built a perfect snowman in the proper method – By starting with a small ball of snow and rolling and rolling it across the snow until it gathered into a big ball. When the snow is right, the snow is right and this happens like magic! I was so excited when Elle and I were out sledding/playing in the yard and suddenly it came together…just as I had supposed it would. I rolled and rolled and rolled the mass until because of the weight, I could not push the ball any more! I thought about calling my husband I come outside to help me push this big ball of snow around…and then thought better of it. Once the ball came to a firm stop I then went to work on the next layer. This one too I rolled around the yard collecting snow. When it was the right graduated size I went to pick it up to put it and put it on top of the first ball. But of course snow is solid water, and water is heavy, and so I could not lift it….seriously…the things I try and do! I then set it aside and and made another ball, this time stopping sooner, at a point I could still lift it. Lastly I made the head, in the same method. When it was complete Elle asked if she could stand on top of the snowman. I love the little ‘dare devil’ in Elle, and if I could have I would have lifted her onto the snowman’s head…but instead she settled for standing on the second ball I had made and set aside because it was too heavy to lift onto the first ball. We then went on to make another snowman, and tomorrow it might become a whole snow family! 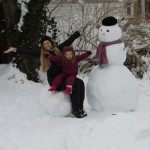 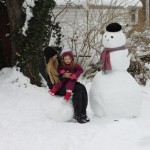 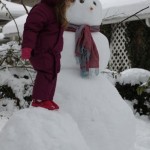 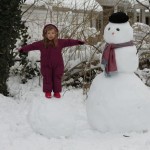 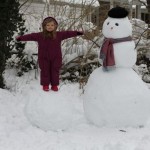 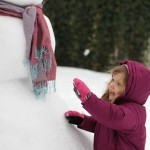 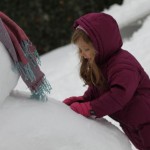 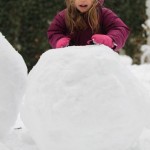 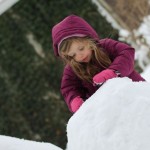