I am a little embarrassed to admit, I did not know about the Bay of Fundy before our trip to Canada, was planned. After hearing about it, it seemed as though it was remarkable and I should have known…anyway, I know about it now, and can share it with you, in case you too had missed out on this interesting information.

Folklore in the Mi’kmaq First Nation claims that the tides in the Bay of Fundy are caused by a giant whale splashing in the water. Oceanographers attribute it to tidal resonance resulting from a coincidence of timing: the time it takes a large wave to go from the mouth of the bay to the inner shore and back is practically the same as the time from one high tide to the next. During the 12.4 hour tidal period, 115 billion tonnes of water flow in and out of the bay.

The tides in the Bay of Fundy are semidiurnal. Semidiurnal tides are tides that have two highs and two lows each day. The height that the water rises and falls to each day during these tides are approximately equal. There are approximately six hours and thirteen minutes between each high and low tide.

To see an indication of the tidal range, we went to Alma, a small Bay of Fundy town north of Hopewell Rocks. Here there was a wharf, and at low tide the boats end up resting on the mudflat. We visited Alma for lunch, during which time it was low tide. Virtually everything in Alma closes for the Winter, but the gas station and one seaside restaurant/grocery store. On recommendation we dinned at the restaurant and they served us a lovely lunch. As everything was closed, we did not stay hours and so I was not able to see the boats rise the several meters to meet the wharf edge. However I found the above time lapse video of a wharf in another town on the Bay of Fundy, which shows the tidal process.

I really enjoyed the scenic drive from Moncton to Alma, it was rural with many farms. I loved seeing the woolly cows sitting in hay, and insisted we stop and take a photo of them. Along the way there were also Art Galleries and Gift Shops, Antique Stores, covered bridges and moose signs! I could imagine that in the summer it is a bustling tourist destination. Here and there I could see little wooden summer cabins built on hills over looking the Bay. Alma itself was a pretty quaint town, with spectacular views. All the while I was dreaming – it would be wonderful to visit in Summer with Cam and the Girls…not sure when…but maybe one day! 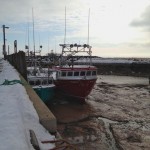 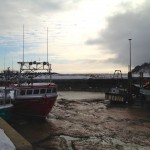 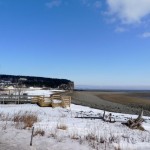 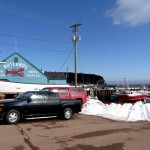 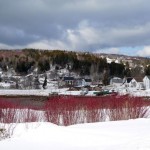 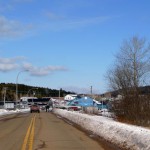 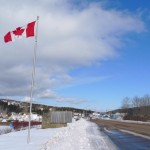 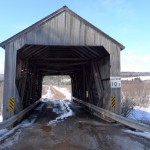 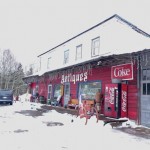 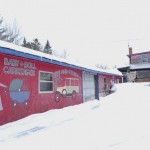 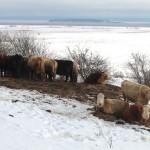 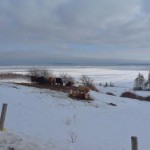 One thought on “Bay Of Fundy & Alma, NB”