The secluded Vale of Cashmere in Prospect Park is located in the northeastern end just south of Grand Army Plaza. It can be difficult to find and were we not led there by a friend we may not have found it. People go to the Vale for many resons, and avoid it for many reasons also. We went there for the Maypole Festival, as it is an annual spot for Maypoles, but it also has a reputation for shrouding drug deals and gay sex. For this reason it is advised not to go there alone in the evening, although no matter the time of day you will possibly still find a parent pushing a stroller or people walking dogs.

The Vale of Cashmere gained its name from Thomas Moore’s poem “Lalla Rookh“. An epic poem that goes on to say: “Who has not heard of the Vale of Cashmere! With its roses the brightest the earth ever gave”. While the Vale of Cashmere in Prospect Park is not a rose bed, the now neglected garden is surrounded by brilliant azaleas that must be nearly a hundred years old. I do not recall ever seeing azalea bushes so big. Thick trunked bushes of white and pink over 6 ft high.

The Vale of Cashmere’s name was chosen by Fredrick Law Olmsted who designed Prospect Park with Calvert Vaux, who hated the name, but it became popular the late 1890’s and the name stuck. It was originally part of the Children’s Playground and the site of the first carousel but the isolation of the area made it unpopular. The fountain had a centerpiece of a nude youth holding a duck surrounded by six turtles. This sculpture was stolen in 1943. Today you will see only simple fountains and the formal sunken garden scattered with leaves amidst old growth.

I loved this series of photos of Maya taken at the Vale. They unfold like a story. A girl on her own enchanted by the garden who then becomes scared and flees. The photos so accurately capture the spirit of the place, there is something mythical, and romantic but also there is an element of fear and foreboding to be felt when there alone. 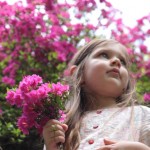 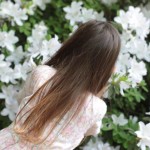 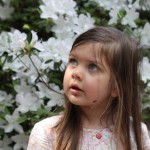 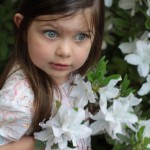 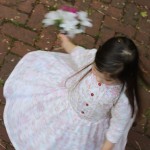 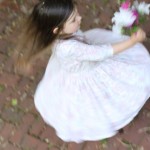 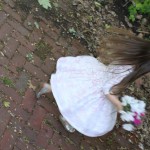 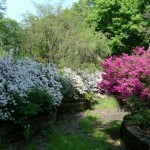 One thought on “The Vale of Cashmere”